Tagged with: MHC in the News | News | Press | SFGATE 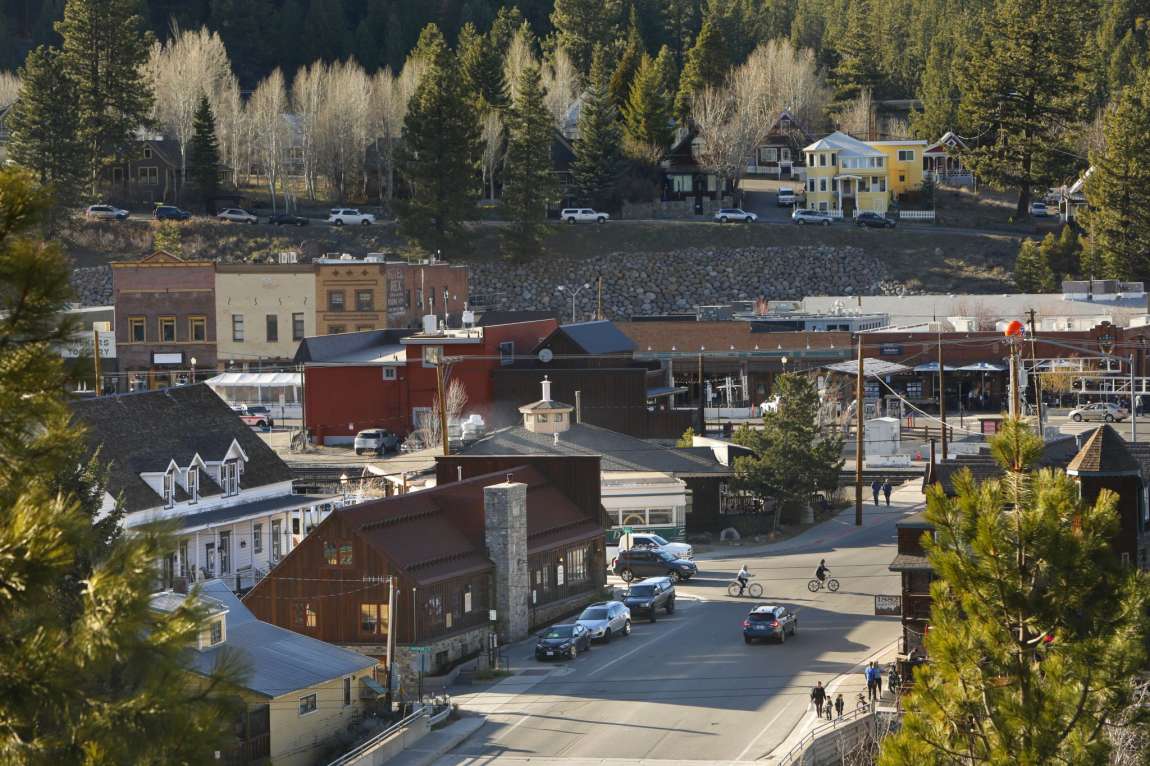 There are two narratives unfolding in Tahoe’s real estate and housing arena.

On one hand, the real estate market continues to boom as a new wave of people settle in Lake Tahoe. In the past year, median home prices in Truckee have risen almost 30% to scratch just below the million dollar mark, according to Redfin, and real estate sales continue to be competitive. Between March and May, a third of home sales in the Truckee region were cash offers and two-thirds received offers over asking price, according to information presented at a Truckee Town Council meeting on Tuesday and data from the Tahoe Sierra Board of Realtors. A third of those new homebuyers work in the tech industry, Bloomberg reported last September. Realtors say this new wave of buyers doesn’t fit the profile of a traditional second homeowner. Rather, they’re a new kind of hybrid resident who might split their time between Tahoe and San Francisco.

Meanwhile, more than 9,500 locally employed workers and full-time residents in Truckee and North Tahoe have “unmet housing needs,” which means a household is either cost-burdened, overcrowded, or living in poor or inadequate conditions, according to a new study by Mountain Housing Council of Tahoe Truckee, a group that advocates for housing solutions in the area.

Some 3,500 of those households are commuters, many of whom are driving an hour or more on Interstate 80, Highway 50 or Mount Rose Highway to get to work. This cohort would much rather skip the commute and live in Truckee or Tahoe, if only they could find a place they could afford.

Another 4,700 households say they currently live in Tahoe, but the homes they are living in are inadequate, meaning they are too expensive to afford on their wages, so they’re scraping by. Or they’re splitting the cost of living with other families to the point of overcrowding. A lot of Tahoe’s lower income housing is also outdated, built in the 1970s during a boom in construction.

Add to that another 1,275 seasonal workers, approximately, who are in need of places to live for Tahoe’s winters or summers.

The Mountain Housing Council study is among the first locally driven, data-backed looks, building on overwhelming anecdotal evidence, at how Lake Tahoe communities have morphed into “Zoom towns” full of remote workers since the pandemic — and how dire the housing crisis truly is for locally employed residents and the economy.

The findings were presented at an emergency meeting in late June called by the Mountain Housing Council. Between 50-60 elected officials, government leaders, housing experts, nonprofit groups and business owners attended.

The council’s Housing Needs Assessment inventoried 34,191 units in the study area, the vast majority of which are single family homes. It’s an update to a similar assessment that was done in 2016. In the past five years, the problem has only grown: The”unmet need” for housing among local residents in North Tahoe and Truckee increased by 12%, or approximately a thousand additional households. Tara Zuardo, project director at Mountain Housing Council, thinks the increase in demand happened, for the most part, during the COVID-19 pandemic.

The numbers aren’t surprising. It’s long been easy to see how Truckee and Tahoe have changed in the past five years — let alone in 2020 — in ways that go far beyond the numbers of tourists who are driving up for the weekend. But now we have some numbers to back up that anecdotal evidence.

Added up, Tahoe’s housing crisis is compounding its hiring crisis, posing a threat to the economy at large.

“We’re still in the beginning stages of it,” Zuardo said. “But I think we could be headed for some serious repercussions. I think it hasn’t been felt yet, but once it is, you’re going to get locals who’ve been here awhile a lot more concerned.”

Streets lined by second homes once emptied in the spring and fall; before the pandemic, 65% of homes in Tahoe were empty more than half the year, according to Mountain Housing Council. Now, many of those second homes have driveways full of cars and are occupied full time.

“Some of those folks have either moved into those second homes, or they’ve sold them,” Zuardo said.

For locals, housing has been expensive and hard to find in Tahoe for many years. Now, with median prices of homes hitting seven figures and a nonexistent rental market, it’s seemingly impossible for local workers to live here unless they bought their house in the 1990s or early aughts, when housing in Tahoe was a little bit more realistic for the community. Some 70% of people who own their homes in Tahoe and live in them full time have stayed in the same place for at least 10 years, according to the survey.

Houses that once were rented to locals have either been sold and purchased by a new wave of part-time residents or turned into vacation rentals. Landing Locals, which helps local renters find long-term rentals, told SFGATE earlier this year that rents have increased between 25% and 50% since the pandemic began.

Because housing is so hard to find, the region’s workforce is packing up and moving away, while a new wave of residents, including many who make their money in the Bay Area, moves in. Coffee shops are full of people working remotely, yet “Help wanted” signs are displayed on almost every business window and storefront in downtown Truckee and Tahoe City’s main street.

And still, almost every day, a post appears on a Facebook group for Tahoe locals pleading for help with a familiar story: An out-of-town landlord gave their tenant the boot and now that tenant is desperate to find a new place to live.

“Now we’re really moving into emergency solutions,” Zuardo said. “What can we do in the next six months to house people?”

At the meeting, participants divided into breakout sessions to study different short-term solutions. Some employers are considering ways to pool their money and set up co-op housing for their employees.

Another team is looking into partnering with the state and federal land management agencies, hoping to find places for employees to park their RV, van or at least camp in Tahoe.

Regulatory steps, like temporary rent control or making way for tiny homes, are on the table. Housing leaders and experts are also weighing an emergency declaration or whether to take action under urgency clauses that could expedite future housing projects in the area. For now, Zuardo said that there are worthwhile steps local jurisdictions can take without making an emergency declaration and that Mountain Housing Council is continuing this conversation with locally elected leaders and officials.

A significant part of the demand for housing in Tahoe comes from a group that experts call “the missing middle,” that is, people who work locally and want to live here, too, yet make too much money to qualify for government-sponsored affordable housing programs, but not enough to actually afford the high cost of living in Lake Tahoe. In the housing assessment, demand for unmet housing needs among Tahoe’s “resident workforce cohort” spiked, with need for another 600 units compared with 2016.

Meanwhile, the town of Truckee is continuing their long-term rental program with Landing Locals, for which residents can qualify if they make up to 150% of area median income, or $97,050 for an individual in Truckee. The program is designed to provide incentives to second homeowners to rent out their empty houses to long-term renters. Zuardo also said housing officials are looking to implement a similar long-term rental program in eastern Placer County, covering North Tahoe.

Mountain Housing Council intends to do this survey every year to closely monitor the need for housing in Truckee and North Tahoe. For now, a lot of people in Tahoe are wondering what the fall may bring, when a lot of those tech companies begin to call their employees back to the office.

“[Housing] was a problem before the pandemic,” Zuardo said. “Then we had the pandemic. We live in a beautiful area where everyone wants to live.”

ABOUT THE MOUNTAIN HOUSING COUNCIL

The Mountain Housing Council of Tahoe Truckee (MHC) is a project of the Tahoe Truckee Community Foundation that brings together 28 diverse partners to accelerate solutions to achievable local housing. The MHC’s goal is to build on the needs identified in the 2016 Truckee North Tahoe Regional Workforce Housing Needs Assessment and tackle the unique and pressing challenges of housing in the North Tahoe-Truckee region, including availability, variety, and affordability.

Stay Up To Date With Local Housing Issues and Programs

Follow us on Facebook for weekly housing updates, news, and announcements. Check out our previous meetings for recent housing policy updates and progress; we’ve posted the meeting material from the January 15th MHC Quarterly Update on the website.

We’ve created a new page on the MHC website where the 27 partners of the MHC can share their updates on progress made on various housing programs and policies. Check out the page and learn more about the new Truckee Tahoe Workforce Housing Agency too.

Thank you for subscribing. Please check your email and confirm your subscription.